In contrary to Katy Perry, I’ve never kissed a girl and I don’t think I would actually like it. Whilst the nation has been consumed by a debate on marriage equality as of late, I must admit it wasn’t something that I really engaged in with too much detail. Now, don’t get me wrong, I’ve always believed that same sex couples should have the same rights as heterosexual couples, but it wasn’t something that had an impact on my life directly so it wasn’t a debate that I thought I should be a part of. Well… not until a few weeks ago.

I own FurBaby Boutique & Café. It is a dog café, where we celebrate people coming together with their pooches. It’s a lovely community where everyone, and every breed of dog for that matter, is considered equal. So, when one of our LGBTI customers asked if we had anything in stock that was LGBTI and dog themed, I thought it was a wonderful idea to support one of the many groups of people that support the Café. The rainbow paw print bumper sticker was born. Excited to support the call for equality I took to social media with a post about ‘Love is Love’; calling on followers of the Café to also show their support for our LGBTI friends. 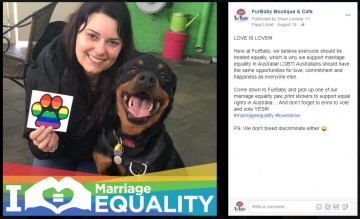 Initially, as I had expected, there were likes a plenty on Facebook. There were messages of support and comments of how customers wanted to have a sticker of their own. Naively, I thought I was safe in my belief that the people I know have the same basic thought about marriage equality as I did. Then it happened, I remember it distinctly. I was sitting in my office working late at night when it hit. That little ‘ding ding’ of a message, a message that never in my wildest dreams did I think I would receive. It was from a customer, a very loyal customer that had shared her breakfast with for at least every second weekend for the last three years. Someone who I considered not only a customer, but a friend. And, it didn’t stop with her, I started to watch our social media followers decrease and found that there were more messages of hatred over FurBaby’s support of marriage equality. So much hatred, that I quickly deleted the bombardment of vile opinions infiltrating my email account and social media accounts. I didn’t want any of my staff or customers to read what I just had to.

I strongly believe that everyone has a right to their opinion. Opinion is one thing, but what shocked me the most is people thought it was acceptable to attack me personally and my business about my beliefs and quote passages of the bible that somehow proved that I was going to hell because of my support of marriage equality. The bible quoting was my turning point. As a devout Catholic, I strongly believe in Jesus Christ and go to church weekly and for someone to use the bible that I know and love to spread hatred goes against everything that I have ever been taught and believe in. Suddenly my sexual orientation was in question; I have never had to defend my choice in who I choose to love before, it was all foreign ground to me.

And, that’s when it slapped me. Like it slapped me right in the face. What I had been subjected to for one evening, is something that my dear LBGTI friends have had to fight against their whole life. Why should they have to defend who they choose to love? How is their love so different to the love experienced by a man and a women? I don’t think they should have to defend their love at all, and that is when I decided to do something about it. Everyone should stand up for what they believe in. And, I believe that when two people deeply love each other they should have the ability to announce it to the world. I believe that legally anyone should be able to declare who they want as their partner in life, regardless of their gender. It is equality. It is progression. It is civilised. It is right. 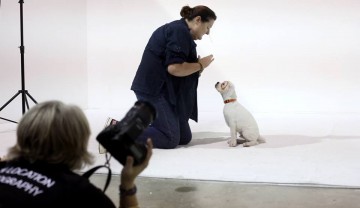 This revelation was a new passion in me, when individuals choose to attack my beliefs and my business as a response I have chosen to stand up and make stance to continue to spread awareness about the need of equality in this country. I reached out to a dear friend of mine Kelly Pilgrim-Bryne and her partner, of 23 years, Samantha. We talked for hours about what I had experienced and much more importantly the impact of not being able to marry, and the debate this postal survey has on them and their daughter. Between us we decided to pool our resources together and create a work of art that will not only promote our desire for equality but showcase it in a cute way for a bit of fun.

I spoke with a several of our FurBaby clients to see if they would be interested in their furbabies being featured in a colourful and fun photo in support of marriage equality in Australia. The response was positive and almost immediately we had 6 dogs volunteered, each representing a colour of the rainbow, and the result is what you see!

Kelly is an award winning professional pet photographer, from 7 to 1 Photography. FurBaby has its own Groom & Pamper Salon with very talented Groomers, including Charmaine Cayeux. We are in the unique position to allow our furbabies to spread awareness about the need for equality in this country. Using pet-safe chalk that washes out with water we coloured the furbabies in the LGBTI Pride Flag, with cute smiles we are putting our paws up for equality! 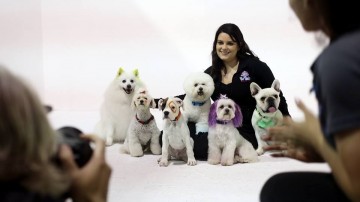 You too can put your ‘Paws Up’! It’s time to stand up and help make a difference for what you believe in. The LGBTI community needs all of us, regardless of your sexual orientation, to stand beside them in this fight for equality. So, post your stories of support and join in the conversation. Let’s fill the internet with photos of furbabies supporting our LGBTI friends in the cutest campaign for equality; don’t forget to tag #furbabies4equality